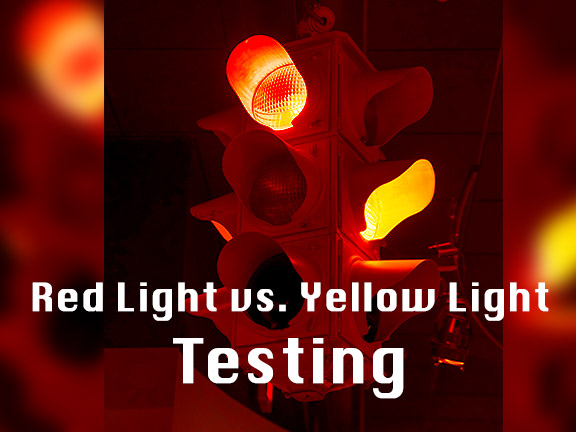 You may have never stopped to consider it, but not all medical tests are the same. It seems like an obvious statement right? There isn’t one standard test that checks every possible condition, you have different tests for cancer, for diabetes, for hashimotos thyroiditis, and the list goes on and on. But did you notice the one common thread between each of those? They are all diseases or conditions that were caused because a system or organ in the body was not functioning properly. The question is not whether or not you have a condition, the better question is to ask why was it malfunctioning to begin with.

Traditional medical testing seeks to diagnose the disease so it can be treated. I call that red light testing because they’re looking for red lights; something that’s already a major problem. If your results aren’t too out of whack to trigger a red light, then the test says you’re fine. When results come back outside the “normal range”, the doctor finds a red light or a  problem. From there, they have a treatment protocol for the disease which involves medication and/or surgery. When conditions are very serious this kind of testing and treatment makes sense; if you have a problem so severe that it could kill you or cause permanent damage, that should be addressed with medication or by whatever means necessary.

Red light testing could save your life and that’s why it is the focus of traditional medical practices. However, the problem is that nobody is asking the follow-up questions of “Why?”. Why did the body malfunction? Most traditional practitioners are not looking at what is going on under the surface to actually cause these conditions in the first place.

For example, with traditional medical blood work, if your glucose levels show up under 100, you are fine, if they come back at 101, there is a red light, you are potentially diabetic, you need medication, etc. Same thing with cholesterol and many other conditions. In Functional Medicine, those numbers are important and we definitely want to know those levels, however, those tests do not tell us what actually caused the disease and is likely continuing to create disease.

We do not just want to know what the numbers are, we want to know why they are what they are. There is a different type of test to give us insight into the “why” and I call that Yellow Light Testing.

Yellow Light Testing looks deeper and seeks to diagnose the root cause of health problems or potential health problems. That could include testing for how your body is processing sugars, why is your cholesterol going high, is your gut biome out of balance, is there a nutrient or vitamin deficiency, are there specific toxins in your system that we know cause hormone issues, etc. If you have a diagnosis that you’ve been labeled with, the question is “why did that happen?”.

Now, let me get on my soap-box for a minute…because your typical medical practitioner does not run Yellow Light Tests, and that type of testing is not usually covered by insurance. Why is that? Well, Yellow Light Testing does not lead to a diagnosis or medication. And unfortunately, our system is set up so that if I can’t give you a diagnosis that can be treated with medication, then insurance is not paying for it. So, you can draw your own conclusions and I’ll step off the soapbox and explain what Yellow Light Testing actually does.

The body is a very complex machine and at its core, it has a masterful design; and because there is a design, we can peek under the hood and see when and why something is not functioning optimally. One of my favorite examples to demonstrate what I mean by “yellow light testing” in the real world is two cases of diabetes I saw in my practice. We had two different patients, both with Type II Diabetes diagnoses, very similar A1C and blood glucose levels (key measurements for diabetics) and on the outside appearance of diabetes – they were the same.

But when we started looking deeper and asking why, not just what, we found two very different situations. The first patient had diabetes for a very long time and the pancreas was not working properly and was basically shutting down. The other patient’s pancreas was perfectly healthy and working fine, that person had a problem where the liver was not able to process the sugar and that is what was increasing the blood glucose levels. Both of these patients were given the same diagnosis, prescribed the same medications by their doctors, but when we asked why we discovered that the cause was completely different. In both of those cases, we saw a reversal of diabetes and got them completely off of medication because yellow light testing helped us be very specific with the root cause of the problem. As you can see once we find the root cause; we fix that, then symptoms being to go away – and yes, Type II diabetes is a symptom of a bigger problem.

An example of one type of Yellow Light Test we use frequently is the Metabolix+ test; it’s one of my favorite. This test gives us somewhat of a 30,000 foot view of what is going on in the body. It looks at gut health and how it is processing food, it looks at the mitochondria which is where the cells produce energy (if that’s damaged, you’re literally aging quicker than you should!), it checks how the body processing energy like carbohydrates and fats, a full amino acid profile to check for any deficiencies and how the body processes protein and includes a toxin panel that looks at between the most common toxins that we know impact different parts of the body. There is alot more that we learn from this test and it can help us identify what is causing the body not to function as designed. Once we find the dysfunction we can address the real problem so the body can begin to heal again. That is one example of the many Yellow Light tests we can run.

To sum things up, Red Light Testing looks to diagnose disease and conditions. Yellow Light Testing on the other hand allows us to look under the surfaces and begin to ask why, why is the body expressing disease and why is it not healing. This allows us to put specific plans and protocols to address root causes and not just cover up symptoms with medications.